In last post, we explored the idea of layered infrastructure and the problem it was trying to solve.

One of the benefits of using Terraform to provision multiple environments is consistency. We can extract environment-specific configurations such as CIDR, instance size, as Terraform modules variables, and create a separate variable file for each environment.

In this post, we will talk about different options to provision multiple environments with terraform.

In a real-life infrastructure project, remote state store and state locking are widely adopted for ease of collaboration.

One backend, many terraform workspaces

I have seen some teams using terraform workspace to manage multiple environments. Many backends support workspace.

Let’s have a look at an example using S3 as the backend.

It is pretty straightforward to create multiple workspaces and switch into each workspace.

Each workspace’s states will be stored under a separate subfolder in the S3 bucket.

However, the downside is that both non-prod and prod environments’ states are stored in the same bucket. This makes it challenging to impose different levels of access control for prod and non-prod conditions.

If you stay in this industry long enough, you must have heard stories of serious consequences of “putting all eggs in one basket.”

One backend per environment

One way to configure individual backend for each environment is to parameterize backend config block. Let’s have a look at the backup configure of the following project structure:

Everything seems OK. However, when you run terraform init in the component, the following error tells the brutal truth.

It turns out there is an open issue about supporting variables in terraform backend config block.

We can create a wrapper script go for terraform init/plan/apply, which create backend config dynamically based on environment and pass as additional CLI argument.

Then we can structure our project as follows.

Let’s take a closer look at the go script.

Then, we can run ./go plan <env> and ./go apply <env> to provision components for each environment with separate backed config.

Terraform have been a significant player in the infrastructure as code field. Since its first release in 2014, it has been widely used in the industry. Terraform finally reached 1.0 on 8 June 2021.

It is dead simple to provision and manages resources via terraform’s human-readable, declarative configuration language. However, you might only see the challenges when using it with anger in real-life projects. In this post, we’ll talk about the idea behind layered infrastructure; The problem it was trying to solve, and how to adapt it in your project.

Technically, we can provision a whole environment including networks, subnets, security groups, data stores, EC2 instances in one single terraform file. See the example below.

However, this would lead to a slow deployment process. To apply any resources changes, terraform would have to query and compare the state for each resource defined in main.tf.

We knew that the frequency of changes to different types of resources varies drastically; for example, the chance of changing the number of EC2 instances would be significantly higher than VPC CIDR. It would be a massive waste for terraform to compare hundreds of nearly unchanged resources to increase the instance number for an AutosScalingGroup.

If we use a remote state store, we can only apply any infrastructure changes to the environment one at a time.

There’s room for improvement. In a standard application deployment, we can classify these resources into layers such as application, compute and networks; the higher layer can depend on resources in lower layers.

Resources such as VPC, subnets, internet gateway, Network Address Translation (NAT) Gateway, network peering are essential to provision resources mentioned above. With these layered infrastructures, we can provision resources in different layers independently.

As you can see from the layout, prepending number to component name makes it easy to understand their dependency.

Now let’s have a closer look at this layout. The layered infrastructure has three key concepts, module, component and environment.

For example, terraform-aws-vpc is a community module that can be used to provision VPC with subnets.

You can also maintain in-house terraform modules for shared codes within your organisation.

An environment components groups multiple closely related modules or resources together. It can be provisioned independently within an environment. A component might depend on other components; Cyclic dependency must be avoided in component dependencies. A component usually has the following structure:

In the context of infrastructure as code, an environment is an isolated deployed instance of one or more components configured for a specific purpose, e.g. “dev”, “test”, “staging”, “production”. 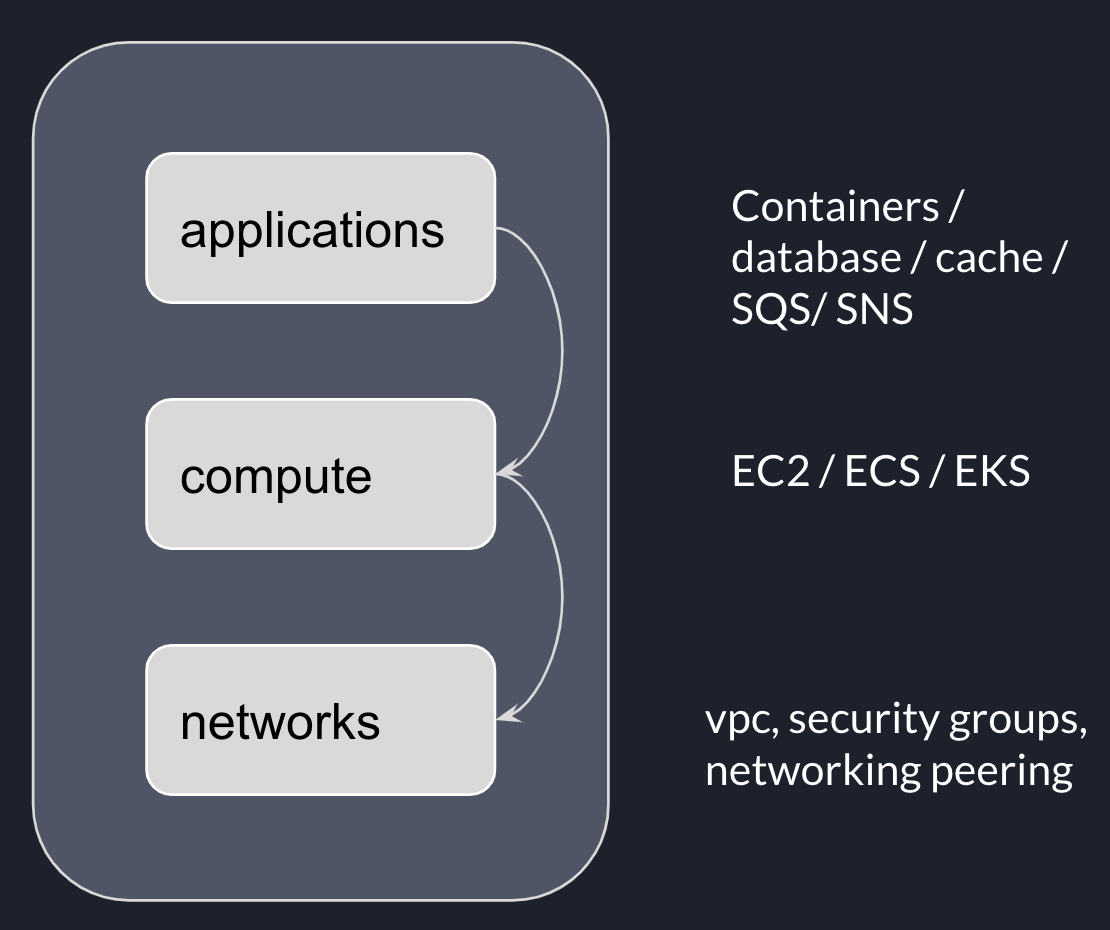 There are many benefits of adopting this approach, such as

We explored the problem layered infrastructure trying to solve; The benefits of this approach, and how to adapt it in your project.
This idea was inspired by Terraform Best Practices.

In this post, we’ll discuss our journey of tuning the performance of a few Kafka and KafkaStream application.

Divide and conquer Breaking down overall performance target into individual components have been proved works very efficient. In a distributed system that has a dozen services, There could be many bottlenecks, which might interfere with each other; It is extremely challenging to test the hypothesis in such a dynamic environment.

By define performance target for individual components and strategically tackling “low hanging fruit”, We were able to archive significant improvement in a short period.

It is essential to measure the system before even tuning it. Having measurement in place helps the team understand the current and historical performance of the system.

Usually, the performance tuning requirements are described in one of the following formats:

By creating customised metrics that measure latency and throughput, and create a dashboard from collected metric data, We’re able to test the hypothesis at a swift pace.

With the measurement capability built-in, we do observe significant latency during performance testing. However, without comprehensive insights into the system, it is challenging to locate the bottlenecks.

There’re two types of metrics that are essential to have to build meaningful insights into an application:

Collecting these metrics and create a comprehensive dashboard for an application give us a single place to identify the potential bottleneck.

There’re many options for metric collection and aggregation. We use AppDynamic to collect and visualise these metrics, it has been beneficial to be able to have the ability to look at these metrics retrospectively after we changed a few parameters.

Also, Kafka exports a load of metrics via JMX, people might be overwhelmed when looking to them. We found this blog post from datadog is the best of explaining the meaning and indication of some key metrics.

We noticed that our KafkaStream application’s memory usage constantly growing and eventually used up all available memory.

It turns out that this is not a memory leak. Rocks DB used a large portion of off-heap memory (non-heap memory), even JVM heap memory usage is stabilised around 400MB, the RSS (Resident set size) of this application process continually growing.

By providing a customised rocksdb configure, we can limit the off-heap memory to less than 4GB, provided that we haven’t observed performance degradation.

There’re multiple consumer and producers in a KafkaStream application. Any misconfigured consumer/producer properties could contribute to the overall delay.

One of my favourite feature of KafkaStream is the stateful operation without losing the ability of horizontal scaling.

However, we could be caught by some unexpected behaviours without using this operation cautiously.

Kafka Stream creates a local state store for each partition to perform the stateful operation, with the option of back up data to changelog topic.

If retention.ms is not specified, broker config log.retention.ms(default 7 days) will be used as a retention period of changelog topic.

Tracking the root cause of a topic co-partition issue

When joining streams in Kafka Stream application, one critical prerequisite is that topics need to be co-partitioned.

In this post, I’ll share my experience of tracking down an issue of topics not fulfilling co-partition guarantee, when using DefaultPartitioner and confluent’s KafkaAvroSerializer in topic key.

Service A and B produces records with key k1 to corresponded topics, When service C create two KafkaStream from topic A and B, and join them together; it complains that no matching record for key k1.

One additional item I would like to add to this requirements is:

For the same key, the record should be on the same partition across these co-partitioned topics.

Service C complains that it can not find a matching record for key k1 as it considers only records from the same partition on both topics, while in reality,k1 was sent to partition 2 of topic A but partition 0 of topic B.

Even the configuration of topic A and B, service A, B and C meet all the requirements defined above, why is that?

Uncover the root cause

The following diagram demonstrates how the partition number calculated.

Firstly KafkaProducer delegate to KafkaAvroSerializer to serialize an Avro object to a byte array, the serialized result includes schema id.

Secondly, the keySerializer talk to schema registry to resvole the schema Id for topic key and append it to serialized bytes.

There’re two ways to address this problem; both have pros and cons.

The upside of this approach is co-partition is guaranteed as long as these requirements are met. The downside is losing the ability to evolve key schema. (who want to do this anyway?)

The upside of this approach is the ability to evolve key schema. The downside is additional complexity to services.

Using DefaultPartitioner and KafkaAvroSerializer in the topic key will make the topic fail to meet co-partition requirements.

RecordNameStrategy won’t help in this case, as when there’s a need to upgrade the key schema, new schema id will be generated, which in turn generate different serialized bytes and yield different partition number. Even for the same key.

In this post, I’ll provdes some tips to create readable angular test.

Use describe or nested describe to structure specs

It is quite common to see a bunch of local variables defined at the top of a spec then initialize them somewhere else in the code. It makes it super hard to understand the value and usage of those variables when going through the code.

Some services we created are just a very thin wrap of $http, Eg. :

dead simple but is it worth to test it?

Encapsulating business logic into Service instead of Controller or Directive will lead to a higher test coverage of the code.

Directive is hard to test, here’re some tips:

Make directive as small as possible

One common mistake I observed is that directives have too much responsiblity.
Only have view/rendering related code should live in directive, any other business logic should be extracted into a service. If the “extra” code is related another view extract into another directive.

Limit the usage of $scope variables.

Avoid bussiness logic in templates. Replace them with directive methods that express the intent of the logic, Eg. :

Do not test directive template

Given we have made the template simple, we don’t need to test them. Testing directive methods(e.g. isEditable) is much easier to deal with doms in template, but provides enough confidence of quality.